This week on Athens News Matters, Athenians of both Ukrainian and Russian descent are becoming worried about friends and family as conditions worsen in Eastern Europe. A group rallied in downtown Athens to show their support for the beleaguered nation, WUGA was there to cover the story. ACC 5th District Commission candidate, Matt Pulver, joins the team to discuss the new ACC Commission maps that are now officially signed into law. According to a UGA researcher from the University of Georgia College of Public Health, where you live can affect the quality of your mental health care. After 50 years, Mercer University righted a historic wrong by putting Gwendolyn Payton's work on exhibition and awarding her the art degree she sought. After nearly two years, the Georgia Museum of Natural History reopens its doors to the public. Our panel breaks down this week in news and politics.

Martin Matheny
Martin Matheny was promoted to Program Director and Content Strategist on July 1, 2022. He has served as the Executive Producer of our local news program 'Athens News Matters', and he covers local government for WUGA News. He started at WUGA in 2012 as a part-time classical music host and still hosts WUGA's longest-running local program 'Night Music' which is heard on Tuesdays and Wednesdays on WUGA at 10pm. 'Night Music' can also be heard statewide on the GPB Classical stream Mondays and Tuesdays at 8pm. As part of 'Athens News Matters' Martin works with student interns to help cultivate the next generation of Public Media rock stars! In his spare time Martin is an amateur book binder and freelance musician who frequently performs with Big Band Athens playing bass trombone. He lives in Normaltown with his wife, Shaye and dog, Murphy.
See stories by Martin Matheny 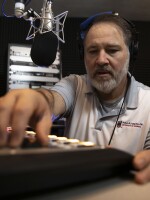 Chris Shupe
Chris Shupe began work at WUGA as a part time weekend announcer in 2010. At the time Shupe was focused on maintaining a thriving career in Real Estate, as well as balancing his time as a local entertainer. Shupe may be best known as The Athens King, a tribute to Elvis Presley, which often included an 8 piece show band! In 2012, Shupe joined WUGA full time as the station’s Morning Edition Host and Assistant Operations Director, and after 2 years of serving in that role Shupe was hired as Program Director for the station. As PD, Shupe spearheaded a return to more involvement in national conferences and continuing education opportunities through industry professional organizations like the Public Radio Program Director's Association, Public Media Development and Marketing Association, Morning Edition Grad School, the NAB, and the Public Media Journalists Association. This involvement led Shupe to undertake a comprehensive market study in 2015, the first such examination of local audience trends in more than 15 years.
See stories by Chris Shupe

Alexia Ridley
Alexia Ridley joined WUGA as Television and Radio News Anchor and Reporter in 2013. When WUGA TV concluded operations, she became the primary Reporter for WUGA Radio. Alexia came to Athens from Macon where she served as the News Director and show host for WGXA TV. She's a career journalist and Savannah native hailing from the University of Michigan. However, Alexia considers herself an honorary UGA DAWG!
See stories by Alexia Ridley
Related Content